“The three countries that make up the Benelux region are very strong in management.

The Netherlands for instance has grown so many large Global corporations like Shell, Unilever, Heineken, Philips, A-Hold, the Schiphol Group, Stork Group, Campina and so on. The World Court, International Criminal Court, Organization for the Prevention of Chemical Weapons and European Police, are all headquarter
ed in the Netherlands. Moreover, two-thirds of the country is below sea level and yet it has been able to manage floods effectively.

Belgium headquarters NATO – the strongest and largest military alliance in the world -, the European Union.

Luxemburg is a country of less than half a million people and yet has so much wealth.
This shows that these countries understand the gritty challenges of management very well”

Far left Amuche Nzeogwu Elumelu at one of the management training in Lagos. 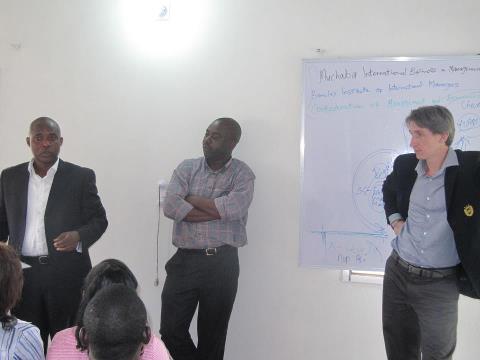