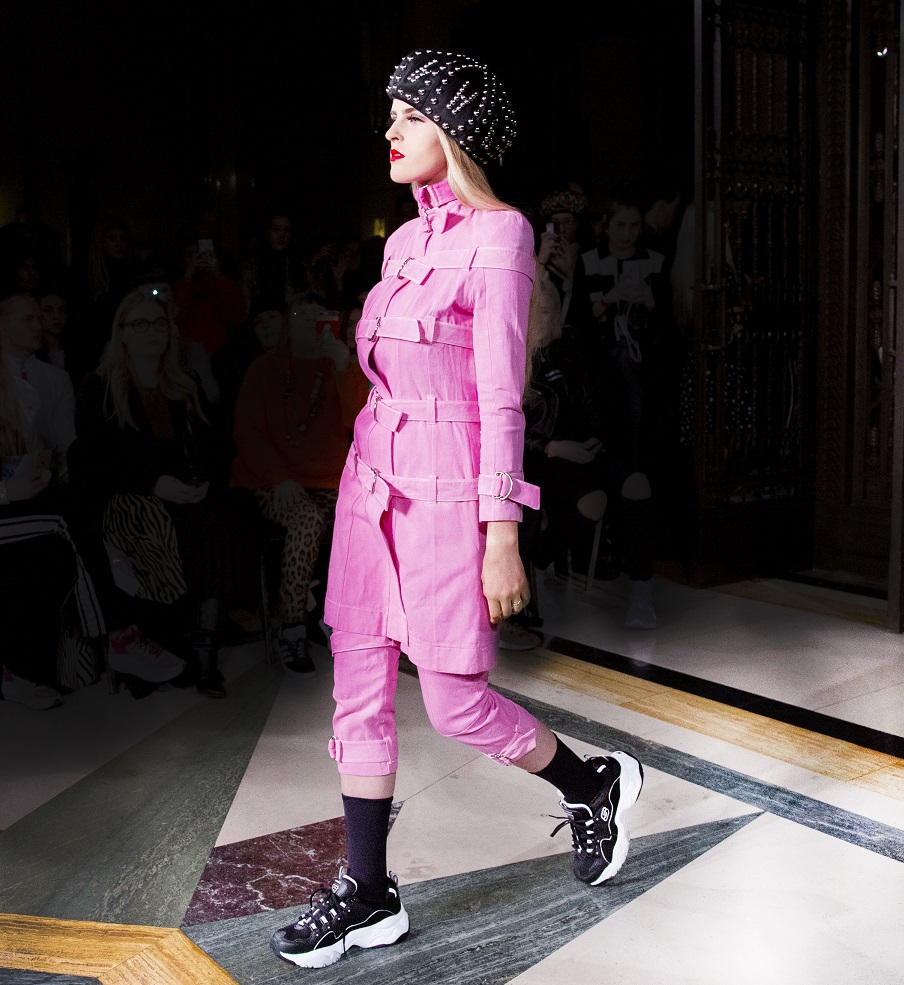 The iconic Skechers D’Lites footwear collection stepped onto the runways of Mercedes-Benz London Fashion Week as part of the Autumn/Winter 2019 collections from three celebrated designers. Models wore the global footwear brand’s iconic and retro Skechers D’Lites line during the shows of Jayne Pierson and Pam Hogg, as well as at the Malan Breton event.

“The chunky sneaker phenomenon has been making appearances on runways and in top fashion design houses, so we’re excited that Skechers D’Lites is bringing that buzz and excitement to London,” said Marvin Bernstein, managing partner of Skechers S.à.r.l. “This look has been resonating with trend-focused consumers in the UK, across Europe and around the globe. After a successful launch with Highsnobiety for our Skechers D’Lites X One Piece collaboration in 2018, we’re seeing the enthusiasm from influencers, designers and fans continuing as style and comfort remain at the forefront in 2019.”

British designer Dr. Pam Hogg has a celebrated history designing for musicians and the SoHo scene dating back to the Eighties. Her Autumn/Winter 2019 collection shown at Fashion Scout, Freemason’s Hall brought her provocative flair to the forefront. Models in skin-tight catsuits, bright monochromatic ensembles and PVC embellishments walked the runway wearing the retro chunky Skechers D’Lites 3.0—some of which were also embellished.

Skechers D’Lites final appearance was in Malan Breton’s elegant collection of exaggerated outlines, tailoring and daring patterns. The Taiwanese designer’s beautifully constructed pieces complimented the period features of The House of St Barnabas venue as well as the jewelled accents on the Skechers D’Lites 3.0 sneakers. The execution of the relationship between chunky street style and straight tailoring was a statement to both the power of the fashion sneaker and the direction of comfort in women’s styling.

Styles from the collection worn last week include selected colourways from the updated Skechers D’Lites 3.0 collection that features an even chunkier outsole.

Skechers pioneered the chunky sneaker look two decades ago with the Skechers Energy for men and women as well as the Skechers Stamina for men. The style evolved and the Company introduced Skechers D’Lites—a lighter version of its original style—in 2007. Though the collection has always had a dedicated consumer base, popularity accelerated across Asia over the last two years after regional marketing included K-Pop groups. The collection has since been featured on the fashion editorial pages of Elle, Marie Claire and GQ, among others. And in 2017, the Company relaunched an even lighter update of Skechers D’Lites in celebration of its ten-year anniversary. Fashion site Hypebae declared D’Lites the “It Shoe of 2018.”

Subscribe to stay up to date and stay notified about exclusive offers and fashion tips.
More Stories
Beige Is The New Black