Dolce & Gabbana’s sparkling jackets and star-studded dresses on curvy models dazzled Milan Fashion Week on Sunday, as guests and viewers around the world watched the action backstage streamed live.
The pair had gone for slightly rounder-looking girls for their skin-tight dresses, adding a touch of feminine shape and sensuality to a collection otherwise dominated by masculine lines.
The theme was distinctly music-centric, as models with piano key and treble clef motifs on dresses, bags and earrings sauntered down the catwalk to Martha & The Vandella’s “Dancing in the Street”.
Milan met hipster-Brooklyn with oversized, sleeveless or cut-off pinstripe suits worn with Sinatra-style trilbies and pork pie hats on the back of the head.
Bedazzling emerald green and silver jackets and dresses were worn with over-the-ankle socks and high heels, while the series of yellow, black or white floaty star dresses were cut low at the back to reveal black bra straps.
Bloggers’ and tweeters’ comments were posted live on large screens above the catwalk, as webcam footage showed designers Stefano Gabbana and Domenico Dolce rushing to put the last touches to outfits seconds before they hit the floor.
Dolce and Gabbana, who took a smiling bow together after the show and shot straight off to celebrate backstage, showed no sign of concern about an ongoing investigation for alleged tax fraud against them.
At the Salvatore Ferragamo show, romantic strains of classical music and a version of Al Green’s “Let’s Stay Together” sang out as creative designer Massimiliano Giornetti wooed with shimmering satins and soft calf leather.
AFP. 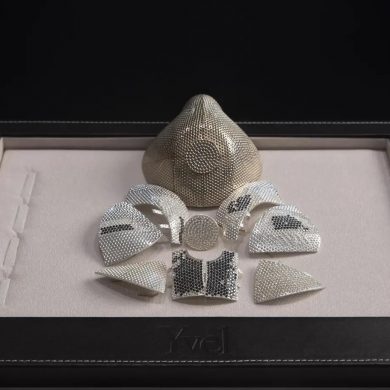 Say Hello to World’s Most Expensive Facemask, made with 3,600 Diamonds and Costs $1.5 Million