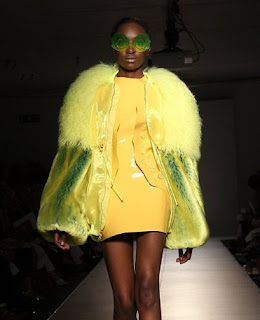 Impatient foot-tapping usually sounds out the summer – a season that fatigues those in the industry for its lack of sartorial fodder – until the September shows. But something always momentarily halts those bored taps in the interim: the graduate fashion collections. After Central Saint Martins kicked things off earlier this week, it was the turn of 36 young designers at the Royal College of Art to stir the fashion crowd.

What got the womenswear students’ brains ticking over here was the “use of space” between the body and clothes. At Anna Smit and Sayaka Kamakura, this was interpreted through exaggerated, elevated shoulders and fitted dresses overlaid with chiffon which seductively floated away from the body. The distance between cloth and flesh was also intricately emphasised in Nicola Morgan’s dresses which were propped up at the neckline and bust with rigid helix-like sculptures.
If “space” was key to womenswear, “form-fitting” held true for the strongest pieces in knitwear. Victoria Hill’s burgundy V-neck opening dress stood out with its elegant hue and flattering cut, while Maria Kamper’s mint-green floor-hitting gown delighted with its surprise short hemline at the back. Helen Turner added a welcome dimension to her simple shifts with long tassels.
Speaking of dimension, texture proved a focal point: fur, rubber and tulle were melded together in fun neon-hued jackets and minidresses at Philipp Schueller, while Itziar Vaquer featured a beautiful beige mac made out of the softest plastic. Hao Feng Li probably had the prettiest rendition of the theme with his “fabric chart” dresses in a muted palette of lemon, duck-egg blue and cream – in motion, the densely-packed millefeuilles of silk patched onto dresses breezed into life.
Texture spilled over to the gents collections as well, although the novelty factor was ramped up: knitwear designer Hannah Taylor sent out models in balaclavas with fierce big-cat faces on and sloppy sweats to match (heads up: jumpers with animal faces featured in this winter’s Givenchy and Emanuel Ungaro collections, too).
Calum Harvey continued the texture motif – with a twist. Inspired by Twenties cross-dressers, his dandy (or was it a lady? A woman came out under the cover of a men’s suit) favoured stylish shagpile and fur-lapelled coats, and feathered collars.
In the end, Harvey’s message of transition served a rather fitting metaphor for him and his peers, some of whom will surely move on to bigger things.

Subscribe to stay up to date and stay notified about exclusive offers and fashion tips.
More Stories
Whitney Houston: A Style Goddess