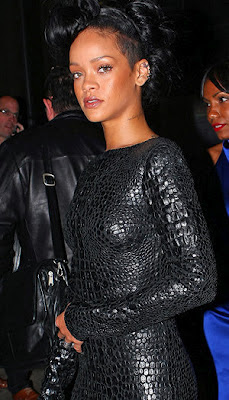 Rihanna needs to slow down. For the second time in a matter of months, the “Talk That Talk” singer has had to be hospitalized following non-stop touring … and partying. Her latest trip happened after a late night of revelry following Monday night’s Met Costume Institute Gala in New York City. On Tuesday, Rihanna, 24, posted a photo on her Twitter page of her arm hooked up to an IV drip. Although she did not divulge any information about why she was ill, a source tells “Entertainment Tonight” that she “had a fever and flu since last week and needed an IV but is fine now.” 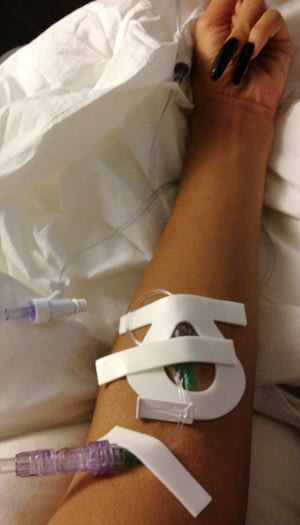 Indeed, Rihanna was so under the weather on Saturday, she skipped her final dress rehearsal for her “Saturday Night Live” performance, which reportedly infuriated the show’s creator, Lorne Michaels. “Rihanna was sick and needed to save her voice for the live show,” her rep later clarified. But any illness didn’t seem to slow her down — because she was back out on Monday for the fashion soiree. Clad in a super-tight Tom Ford crocodile-embossed gown, Rihanna partied until the wee hours and posted photos on Twitter of her with La La Anthony, Sarah Jessica Parker, and rapper Rick Ross. And just a few days before that, the “Where Have You Been?” singer hit up a strip club with her entourage. In photos she posted from that particular night, Rihanna is shown showering many of the dancers in cash as she drinks a clear liquid from a cup.
“Rihanna loves to party but this past month she’s gotten really out of control,” a source tells Star magazine. “She’s been drinking almost every day and talking about smoking weed a lot, too. Everyone is telling her to slow down and think about therapy, or even rehab.”
Luckily, she has a relatively light schedule in the coming weeks before she begins a European tour that kicks off in Oslo, Norway, at the end of June. Rihanna should probably just lay low and rest up … but we bet she probably won’t.

Subscribe to stay up to date and stay notified about exclusive offers and fashion tips.
More Stories
DRESS SENSE FOR THE WEEK | WHICH WILL YOU BE COMFY IN, BE IT SUMMER OR WINTER?