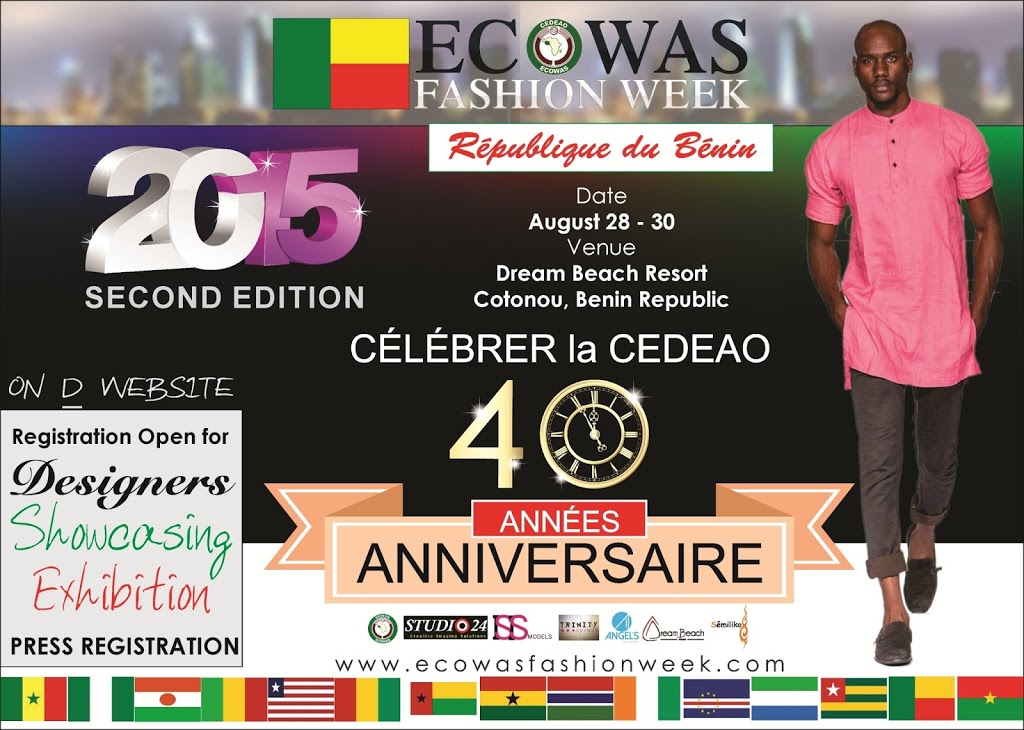 The Economic Community of West African States makes its 40th Anniversary with a fashion Week in Cotonou, Republic of Benin.
Ecowas Fashion Week currently in its second edition is recording successes already on the building “fame board”. The organizers of EFW are mostly interested in building, expanding and encouraging fashion, and a common market hub amongst the West African States. ECOWAS-governed region is comprised of fifteen (15) countries: Benin, Burkina Faso, Cape Verde, Cote d’Ivoire, Gambia, Ghana, Guinea, Guinea-Bissau, Liberia, Mali, Niger, Nigeria, Senegal, Sierra Leone and Togo.
ATTENDANT BENEFITS OF ECOWAS FASHION WEEK
The average African youth is known for their vibrant and entrepreneurial spirit especially if in an enabling environment.
Apart from the chrematistic gains of ECOWAS FASHION WEEK in the region, one other key benefit will be the entrepreneurial engagement of youths across the 15 countries. Fashion creatives in designing, manufacturing, makeup artistry, styling, media, PR, photography, and beauty segments will be brought on board.
Awards and recognitions like “Lifetime Achievement Award” and The “ECOWAS Young Designer of the Year” will be given to designers who have contributed immensely in the area of fashion and most outstanding upcoming designer respectively. Being a yearly event, this will spur healthy competitiveness among young upcoming designers in the ECOWAS region to put in originality in their work.
One critical benefit when Ecowas Fashion Week kicked off was putting Africa on the world map thereby attracting mainstream investors in the region. It is also interesting that ECOWAS is celebrating its 40th anniversary, and the beautiful Republic of Benin has been selected to host the Fashion Week, this is set to boost the tourism visibility of the country which is part of the objectives of Ecowas Fashion Week. The 40th Anniversary inauguration will be done by the Prime Minister of Benin Republic followed by a fashion exhibition and the event proper.
ECOWAS FASHION WEEK are partnering with top buyers who will be exposed to the raw ingenuity of these fashion creative. With reference to this, Joan Okorodudu said, “I am overwhelmed and honored. I am excited about this event and I think, the West African people especially the people of Benin Republic are more excited than me.” The organizers of the EFW are so bent on the success of the event that it defeated the effect of Ebola during the maiden edition, recording major turnout in attendance and participation.
In this second edition, anticipation gets a step higher as the organizers – IBCNL, Lagos Nigeria teams up with major corporate bodies in the Republic of Benin such as Trinity Events (handling the event) and Angels Modeling Agency to launch the 2nd edition of the ECOWAS Fashion Week. The event will be attended by many International Super Models, Celebrities, Renowned African Designers, and several other fashion brands.
Basically, the objectives of this fashion week are:

Subscribe to stay up to date and stay notified about exclusive offers and fashion tips.
More Stories
JANET JACKSON AND HER VERY SMART MAN.