Container export volume at the Port of Los Angeles grew 16 percent in 2010 compared with the previous year.
“The 2010 volume gains far surpass our initial estimates, and we’ve been able to facilitate some export opportunities in the past year through our Trade Connect initiative and increased networking with local business stakeholders,” said Geraldine Knatz, the port’s executive director. Trade Connect is a series of workshops that help domestic business successfully navigate the rules, regulations and logistics of exporting to countries such as India, China, Japan and Korea.
Last year, total exports rose 10.3 percent to 1.84 million 20-foot containers—up from approximately 1.67 million 20-foot containers in 2009 and beating out the previous export record of 1.78 million 20-foot containers in 2008. Imports increased as well, growing 12.8 percent in 2010.
Los Angeles Mayor Antonio Villaraigosa said the surge in container volume bodes well for the city and the nation. “With this 16 percent increase in 2010 container volumes, the Port of Los Angeles is putting people back to work and doing its part to help President Obama meet his goal to double national exports over the next five years,” Villaraigosa said in a statement.
The Port of Los Angeles, which is the busiest port in the nation in terms of container volume, handled a total of 7.8 million 20-foot containers in 2010. That included all loaded and unloaded containers coming in and out of the port. 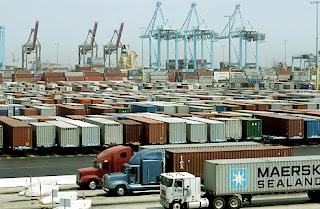 Subscribe to stay up to date and stay notified about exclusive offers and fashion tips.
More Stories
MODELS FROM RIP THE RUNWAY SHOW 2011