OSCARPISTORIOUS’S HOUSE AND THE FATAL SHOOTING. 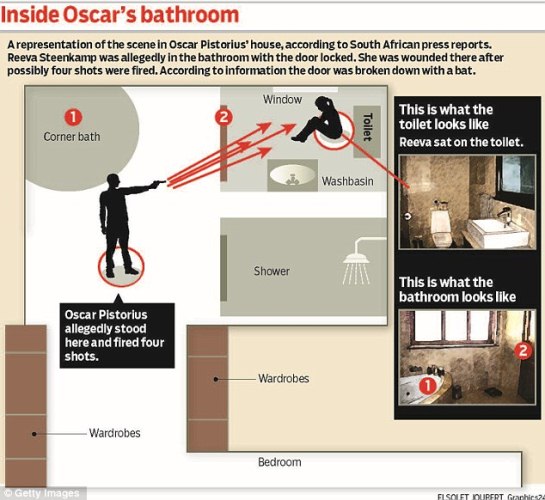 In the first half of the morning session damning allegations surfaced that the police and prosecution say undermine his defence, but after a recess his defence team fire tough questions at the main witness, chief investigative officer Hilton Botha.

As the prosecution began setting out its case on Wednesday, they claimed a witness heard gunshots, saw the lights on, heard ‘a female screaming’ and then more shots.Mr Botha – the first officer on the scene – told the packed court a separate witness said they heard an hour-long fight between 2.am and 3.am before the sound of gunshots rang out.

Earlier Mr Botha said he arrived at the upscale Pretoria house at about 4.15am last Thursday and the 29-year-old model had already been declared dead – ‘she had on white shorts and black vest. She was covered in towels.’


Pistorius, who underwent below-the-knee amputations when he was 11 months old, said he shot through the toilet cubicle door while on his stumps but the court heard the bullets’ trajectory was through the top of the door.
Mr Botha said he believed the bullets were fired down, suggesting that Pistorius was wearing his prosthetic legs when the shots were discharged.
Lawyers and police studied plans of the bedroom and bathroom – a projector was used to beam the plans up for the public and press to see.
Gerrie Nel, the chief prosecutor asked Mr Botha if the shots were fired directly at the toilet basin and he agreed.

‘If you fire straight at the door, you miss the toilet,’ he explained.
Police believe a cricket bat found in the bathroom was used to break down the door to the toilet – part of the door was lying in the bathroom. One bullet cartridge was found outside bathroom while three others were inside.
On the shower mat in the en-suite bathroom lay a firearm and an iPhone 4 and iPhone – there was blood spatters on one of the phones.
Mr Botha said four phones in total were found in the athlete’s home and none of them had been used to call emergency services.

The court also heard that two boxes of testosterone and needles were found in Pistorius’ bedroom. where they also found an overnight bag was on a couch on the left hand side of the bed as well as slippers.
Mr Botha said he wanted Pistorius charged additionally with a weapons violation after unlicensed .38 calibre ammunition was found in the athlete’s bedroom safe – though the defence later claimed the ammunition belonged to the athlete’s father Henke.

Pistorius has said he had been a victim of crime and received death threats, but today the court heard there were no records of this.
The athlete made notes with a silver pen as the case progressed.
Mr Botha said there was ‘no way’ he believed Pistorius’s version of events.
He said he believed Pistorius, who won two gold medals and a silver at London’s 2012 Paralympic Games, was a flight risk and he was opposing bail.

He told the court Pistorius has offshore accounts and a property in Italy – which was later disputed by Pistorius’ team – and said that he saw the runner’s family looking for documents and a specific memory stick with details of offshore accounts.
Discussing extradition he said: ‘We don’t want another Dewani to happen. We’re still waiting to get him back in the country.’

He was referring to Shrien Dewani who is wanted in South Africa over the honeymoon murder of his wife in November 2010, but is now fighting extradition in Britain.

Today details were released of a row he allegedly had with a man over a girl at Kyalami racetrack where Pistorius allegedly threatened to “f*** up” the rival.
It was also claimed he was involved in another shooting at a restaurant in Johannesburg in January and asked the gun owner to take responsibility for the incident.

The defence will have to prove the extenuating circumstances that would justify granting bail so Pistorius will be free until the trial starts.
It is not expected to begin for at least four months – it would be heard by a judge sitting alongside two assessors – typically magistrates or retired magistrates – as the South Africa legal system does not have a jury system. (Daily Mail UK)

Subscribe to stay up to date and stay notified about exclusive offers and fashion tips.
More Stories
HOUSE OF JOLA TO PRESENT AT AFRICA FASHION WEEK LONDON