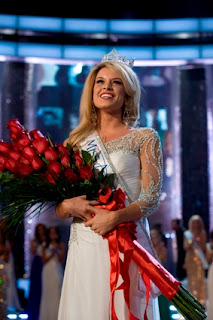 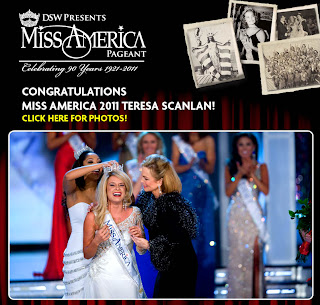 Las Vegas, NV – January 15, 2011 – Miss Nebraska 2010 Teresa Scanlan from Gerig, Nebraska was crowned Miss America 2011 at the Planet Hollywood Resort & Casino in Las Vegas. The final night of the 90th Anniversary of the Miss America Pageant presented by DSW Designer Shoe Warehouse was broadcast live from Las Vegas on ABC. Teresa’s triumphant walk across the stage was just the beginning of a journey that will take her to every corner of the country during her year of service as Miss America 2011. She will travel approximately 20,000 miles each month speaking to audiences about her platform of Eating Disorders: A Generation at Risk, and acting as the National Goodwill Ambassador for Children’s Miracle Network Hospitals. Children’s Miracle Network Hospitals, a non-profit organization dedicated to saving and improving the lives of children by raising funds for children’s hospitals, is the national platform partner of the Miss America Organization.
In addition, Miss America 2011 will be the official spokesperson for Joseph Ribkoff International Clothing Company, who will provide Teresa with a full wardrobe for the year.

Teresa will be a student at Patrick Henry College. Her scholastic ambition is to attend law school and she ultimately hopes to become a judge and eventually a politician. Along with the title of Miss America 2011, Teresa won a $50,000 scholarship sponsored by Artistry exclusively by Amway to continue her education. For the talent portion of the competition, Teresa performed  “White Water Chopped Sticks” on the piano.

The first runner-up was Miss Arkansas Alyse Eady who earned a $25,000 scholarship. Her talent performance was Vocal-Ventriloquism to “I want to be a Cowboy’s Sweetheart” and her personal platform is Boys and Girls Clubs of America.

Second runner-up honors and a $20,000 scholarship were awarded to Miss Hawaii Jalee Fuselier. Her talent was a vocal performance to “Feelin’ Good,” and her personal platform is “Ready for the Real World.”

Miss New York Claire Buffie and Miss Delaware Kayla Martell were the winners of ABC’s America’s Choice, an online competition where the public had the opportunity to vote for their favorite Miss America contestant. The contestants were announced at the beginning of the Miss America broadcast and became the 12th and 13th finalists to compete in the live finale. Two contestants were voted into the Top 15 by their fellow contestants and they were Miss Kentucky Djuan Trent and Miss Oregon Stephenie Steers.

As the world’s largest provider of scholarship assistance for young women and one of the nation’s leading achievement programs, the Miss America Organization last year made available more than $45 million in cash and scholarship assistance. The Miss America Organization provides young women with a vehicle to further their personal and professional goals and instills a spirit of community service through a variety of nationwide community-based programs.