Leila Lopes – Miss Universe 2011
Sao Paulo on Sunday night hosted the annual Miss Universe pageant, and the 25-year-old Leila Lopes representing her country Angola as Miss Angola, obtained the crown after impressing judges with her striking cream-colored gown and insightful answer to the final question. Lopes is the first winner the pageant has ever selected from her country. She was crowned by last year’s winner Ximena Navarrete from Mexico after beating 88 other competitors from around the world.

The Associated Press reports: Lopes deftly handled the interview question that is asked of the remaining top five contestants. She was questioned about what physical trait she would change if she could.

“Thank God I’m very satisfied with the way God created me, and I wouldn’t change a thing,” Lopes said. “I consider myself a woman endowed with inner beauty. I have acquired many wonderful principles from my family, and I intend to follow these for the rest of my life.”
The first runner-up was 23-year-old Olesia Stefanko of Ukraine and the second runner-up was Priscila Machado of Brazil. The third was Miss Philippines and the fourth Miss China.
Contestants spent the past three weeks in Sao Paulo, trying to learn samba dance steps, visiting impoverished children and kicking a football around for cameras as the Miss Universe pageant came to Brazil for the first time.
Despite battling against a home-country favorite, Lopes won over the audience, speaking in the shared language of Portuguese. Angola, like Brazil, is a former Portuguese colony.
“She captivated the crowd, and we were all behind her,” said Brazilian Natalie Bursztyn, 20, who was in the crowd inside Credicard Hall, where the event took place. “It was great that the judges also saw what the fans saw and gave her the crown. Her dress was beautiful and she knew exactly what to say when they asked her the question about her looks.”
Lopes has already begun to address her platform and to work toward her country’s needs. Reports Sarah Ann Hughes:
When asked about racism after her victory, Lopes responded, “It’s not normal in the 21st century to think that way.”
Of the charitable deeds she performed as Miss Angola, Lopes said she’s “worked with various social causes.”
“I work with poor kids, I work in the fight against HIV. I work to protect the elderly, and I have to do everything that my country needs.” she said. “I think now as Miss Universe I will be able to do much more.”
An African beauty queen has not been crowned Miss Universe since 1999, when Miss Botswana, Mpule Kwelagobe, took the crown. Lopes’s win will draw attention to the plight of her country, which is battling extreme poverty.
BlogPost reports: Angola was embroiled in a 27-year civil war until 2002, according to the CIA World Factbook. An estimated 300,000 people died during this period, the BBC reports. Others put that figure at closer to half a million or 1 million.
Of the coastal country’s over 18 million people, 38 percent lived in poverty as of 2009. Life expectancy at birth for men is 50 and for women 53, according t the United Nations’ most recent statistics. An estimated 2 percent of the country’s population suffers from HIV or AIDs, according to USAID.
And just a day after Lopes won the crown, Reuters reported that 17 Angolans were sentenced to three months in prison for participating in a pro-democracy rally.
Lopes’s poise in the evening gown portion of the competition and her flattering dress choice helped win over the crowd. She won the fan favorite for the look, and further enchanted the crowd after speaking in Portuguese. As for Lopes’s beauty tips, they’re simple:
Responding to questions, Lopes said that she has never had cosmetic surgery of any kind and that her three tips for beauty were to get a lot of sleep, use sunscreen even when it’s not sunny and to drink lots of water. She said her smile was her best weapon in the competition. 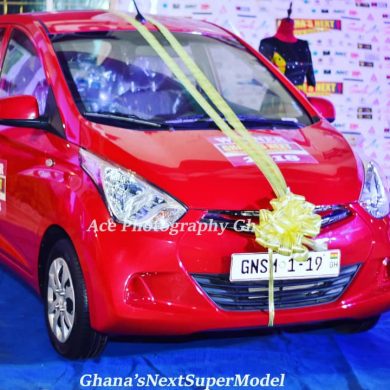