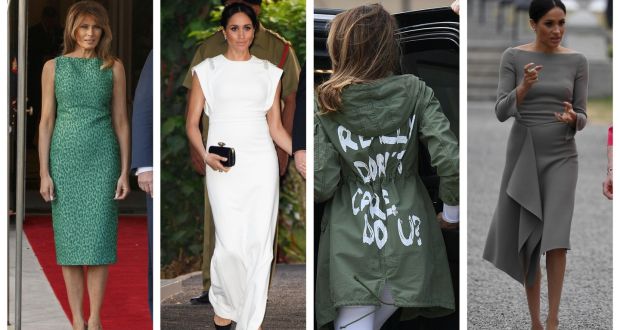 Two of the most photographed women in the world, Melania Trump and Meghan Markle, have very different styles of dress and self presentation. Looks that make each of them stand out – in their own ways

“I want to talk about my trip and not what I wear,” complained Melania when interviewed during her solo tour of Africa in October. Yet the first lady of the US continues to make her clothes a talking point. Sporting a pith helmet in Kenya was certainly not the right signal to send in a post-colonial world.

But that was nothing compared to her faux pas in June when she caused outrage wearing a $52 Zara parka with the words “I really don’t care, do U?” painted on the back, while on a visit to the forceably separated families on the US/Mexican border

The lettered jacket followed the extraordinarily insensitive rigout of stilettos and shades the previous August when accompanying her husband to Houston in the catastrophic aftermath of Hurricane Harvey. In May last year, when she stepped out in a lavishly embroidered coat by Dolce & Gabbana costing $70,000, she stirred things up again.

There have been high points, however. The green leopard-print dress by Brandon Maxwell which she wore to the White House on St Patrick’s Day to greet Taoiseach Leo Varadkar, was widely admired.

Her white suit by Michael Kors on the second day of French president Emmanuel Macron’s visit to the US was highlighted by a head-turning white hat by Hervé Pierre. Her taste for European labels and high heels by Manolo Blahnik or Christian Louboutin doesn’t go unnoticed, nor does her preference for accentuating her waist and embonpoint.

Many would argue that she looks her best when wearing outfits defined by their shape, rather than outlined by belts, as in the black coat-dress by Dolce & Gabbana on her arrival with her husband in China.

Melania’s cool demeanour is a contrast to Meghan Markle’s warmth and more easygoing manner. The Duchess of Sussex’s style is elegant, youthful, increasingly polished and said to be similar to that of Angelina Jolie; both have similar humanitarian interests.

Jess Mulroney, a close friend of Meghan’s since her days on TV show Suits is acknowledged as being her unofficial stylist and was behind the choice of Irish designer Don O’Neill’s floor-length ivory crépe dress which the Duchess wore to a state dinner with the king of Tonga.

Visiting President Higgins at the Aras in July, her taupe dress by Roland Mouret was typical of her preference for well-cut tailoring, highlighting a well-toned body.

Now a global style icon, she prefers solid colour to pattern, wears black for public evening events and is often seen in Givenchy, the French house led by Clare Waight Keller, who made her wedding dress.

A clue to her style was in an endearing interview she gave to Glamour magazine. “I love that French way of styling where if your outfit is pulled together, something has to be dishevelled – your hair or your make up”.

Previous
Ghana’s Celebrities with the best fashion sense in 2018 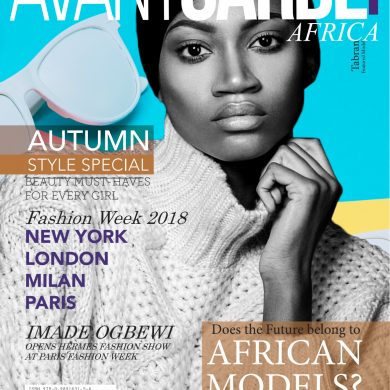