Alexander McQueen‘s commercial line McQ will take to the runway at London Fashion Week for the first time in February.
The British fashion house’s more affordable diffusion line was launched in 1996, offering men’s and women’s wear and accessories, and currently retails at selected department stores and websites including asos.com and net-a-porter.
WWD reports that the London Fashion Week runway show, previewing the line’s Fall 2012 range, is to promote the opening ofMcQ‘s first standalone store in London.
The flagship store will be situated on Dover Street, home to Dover Street Market and shops including Acne and APC.
McQ’s current Fall 11 line has been proving popular, with stars including Emma Watson, Chloe Moretz and Rihanna all recently being spotted in a tartan dress from the range which retails at £470 (€546).
The announcement of the McQ runway show is another coup for London Fashion Week, which yesterday revealed British designerStella McCartney would be showing a one-off special collection at next year’s event, heralding her first ever appearance there.
Like McCartney and other British designers such as John Galliano, Alexander McQueen has tended to favor Paris Fashion Week in the past. It has been confirmed that despite the one-off diffusion line at London Fashion Week, the main Alexander McQueen collection’srunway show will still take place at Paris Fashion Week in March, as will that of Stella McCartney’s main line.
See a video of the Alexander McQueen Fall 2011 ready-to-wear show in Paris here.

Subscribe to stay up to date and stay notified about exclusive offers and fashion tips.
[mc4wp_form id="10001338"]
More Stories 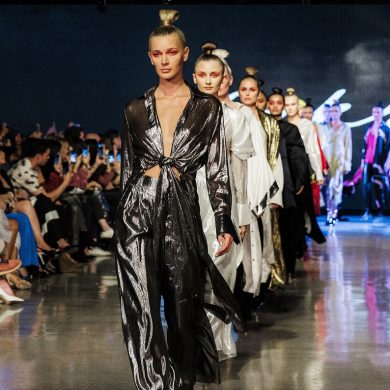