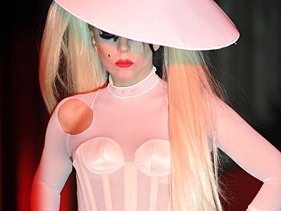 Lady Gaga took a break from taking over the airwaves with her new single “Born This Way” to hit the catwalk at Paris fashion week and take a turn as a runway model for her fashion buddy Nicola Formichetti. She wore his clothes at the Thierry Mugler Autumn/Winter 2011 show on Wednesday, and like any Gaga-related production, theatricality and fashionability were in the air.
CNN caught up with the pop star and the fashion designer in Paris to talk about their relationship and the inclusion of Gaga’s music in the show.Formichetti had asked Gaga to be the musical director for their runway performance, and insisted that “Born This Way” close the event.
“[I thought that] for a fashion show, maybe he wants something a bit more underground, one of the more avant-garde records from the album, but he really wanted me to use [‘Born This Way’],” Lady Gaga said in the interview. “He said it represented female empowerment and that’s what the song is all about, and I think that’s what Nicola is all about, and I’m just really proud to be here.”
When asked whether they were ever nervous about the reception of their respective works, Gaga and Formichetti said “no.” Their show was, in Gaga’s words, all about being “really subjective and really free and really free-minded” and “being proud to be a woman” instead of giving in to the “competition and race” that she felt criticism through the Internet has created.
“Scrutiny is like this massive thing now in this century. For Nicola and I and for everyone that we work with, it’s all about your peers, it’s about people that you respect. It’s about knowing your own strength artistically,” the singer explained. “I think if you ever backtrack or if you ever show a sign of insecurity, it shows sort of a weakness in the idea. Stop analyzing everything so much. Analysis ultimately, I think, leads to divisiveness.”
When asked to comment on John Galliano, the British fashion designer who was the head designer for Christian Dior until he recently was fired for making anti-Semitic comments, Lady Gaga declined. “Let’s skip that question. Let’s keep it positive!” she said.