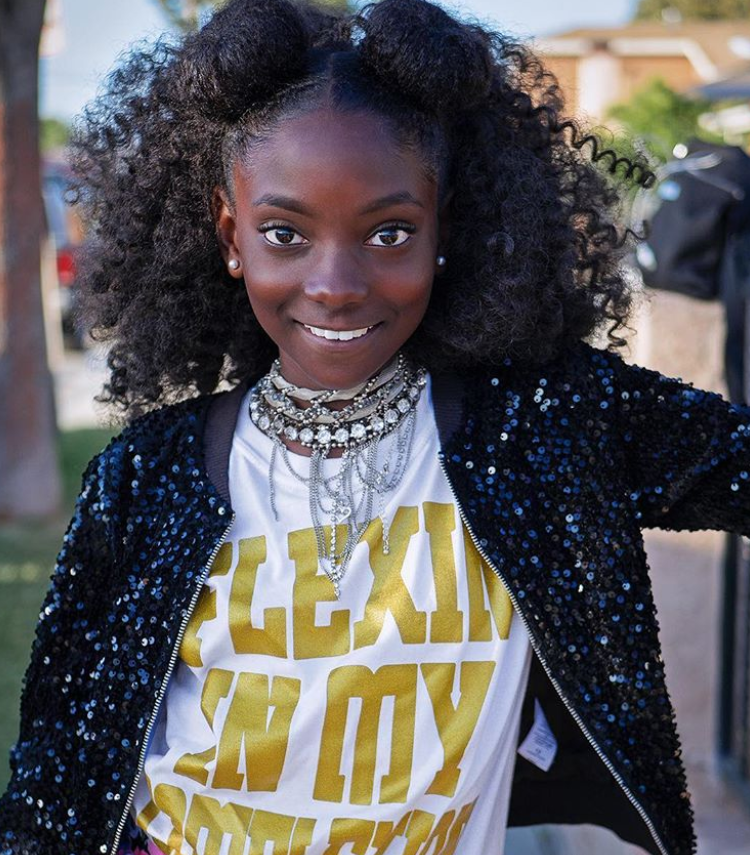 Kheris Rogers, 12, bullied, is making waves with her #FlexinInMyComplexion fashion

“My mom texted me, she said, ‘Girl! @Lupita_Nyongo is wearing your shirt!’ Kheris Rogers is a 12-year-old @KherisPoppin who started #FlexinInMyComplexion with her sister to help others feel comfortable in their own skin after she was bullied about hers.

Taylor Pollard remembers her younger sister, Kheris Rogers, when she was in the first grade, she once asked to stay in the bathtub longer — hoping it would make her skin lighter.

“That’s when I realized that the bullying that was going on at her school at the first grade was really taking a toll on her,” Pollard, 23, tells CNBC Make It. Kids were making fun of Rogers’ dark complexion.

The students in Rogers’ class in Los Angeles were primarily white, recall the sisters. There were four other African-Americans, but Rogers’ skin was darker than everyone else’s. Rogers, now 12, remembers being asked to draw a picture of herself; the teacher gave her a black crayon while the other African-American students were given brown ones.

At the school Rogers attended from second through fifth grade, kids still made fun of her, but this time the kids bullying her were black. Rogers came to learn that this called colorism.

So in the spring of 2017, Taylor Pollard tweeted a photo of Rogers with the hashtag, “#FlexinInHerComplexion,” an expression the sisters’ grandmother, Bettie Pollard, who grew up in Louisiana, used frequently to encourage the girls to feel beautiful.

“When that picture was published, I went viral,” Rogers tells CNBC Make It. (The original tweet was accidentally deleted, but Pollard had a screenshot, which she has since retweeted.)

In response to the post, the sisters received a flurry of messages supporting Rogers and decided they wanted to channel that energy. Together, they came up with the idea of putting the message on a t-shirt. Their business, Flexin’ In My Complexion, launched shortly thereafter in April 2017.

Erika gave the sisters about a $100 to get their project off the ground, Pollard says. They used some of the money to build a website.

Kheris Rogers and Taylor Pollard, the co-CEOs of Flexin’ in my Complexion

“I actually have no experience in making websites, so I just Google-searched how to make a website,” Pollard tells CNBC Make It. “I just went through like a secondary website where you can kind of create it.”

They also paid Gabriel, a foster child Erika knew from her job as a social worker, to teach the sisters how to screen print t-shirts. The sisters set up shop in the garage behind their mom’s house in L.A.

T-shirts on FlexinInMyComplexion.com cost between $15 and $20. Other items for sale include bomber jackets for $54.99, satin pant and jacket sets for $45 and jumpsuits for $29.99. In addition to “Flexin’ In My Complexion,” the sisters also make clothes with sayings like “Coolest Queen in the Universe,” “Coolest King in the Universe” and “The Miseducation of Melanin. ”

As the buzz grew, Rogers became the youngest designer ever to participate in New York’s Harlem Fashion Week, walked the runway for VH1’s “America’s Next Top Model” and appeared on Steve Harvey’s syndicated show “Steve.”

The sisters are co-CEOs. Rogers is responsible for much of the creative while Pollard implements the vision.

Pollard graduated from the University of California, Riverside, where she studied art with a focus on photography and painting. So far the sisters have sold more than 10,000 t-shirts (“Which is so crazy,” Pollard says) and have brought in $110,000 in revenue, according to Pollard, who does Flexin’ In My Complexion’s accounting.

“We are now saving for future ventures,” she tells CNBC Make It, including a college fund for Rogers.

The sisters’ story has captured the attention of some celebrities, helping to propel the momentum. And the sisters didn’t approach the celebrities, either. “They all actually found out of their own just through Kheris’ story going viral,” says Pollard.

Rapper Snoop Dogg posted about Rogers on his Instagram in April 2017.

That June, actress, producer and screenwriter Lena Waithe Instagrammed a photo of herself wearing a Flexin’ In My Complexion shirt onstage at an event.

And a month later, Grammy Award-winning artist and producer Alicia Keys Instagrammed a message of support: “I love this beautiful girl @kherispoppin and I love her mission! Keep shining,” the singer-songwriter wrote. Keys also tagged Rogers in a #WCW (woman crush Wednesday) post.

Actress Lupita Nyong’o posted an image of herself wearing a Flexin’ In My Complexion t-shirt on Instagram in September, writing, “See you, I feel you, I support you, @kherispoppin! And I love my shirt! #FlexinInMyComplexion #WCW the young entrepreneur #KherisRogers, beautiful by ANY STANDARDS. #LoveTheSkinYouAreIn To buy the shirt, visit her page. ”

Rogers was also featured in a Nike ad that ran on Nike.com and in stores from October through December 2017.

Entrepreneurship seems to run in the family: Pollard also runs her own pastry and baking catering business, Taylor Made Pastries, in addition to helping with Flexin’ In My Complexion. She started her baking business in 2010 when she was a sophomore in high school.

But Flexin’ In My Complexion has done more than make money for the sisters. It’s also helped Rogers gain confidence. When she was being bullied, Rogers says she would come home from school upset.

“I would always come home crying, like I would just have tears just coming down my face,” she says.

Subscribe to stay up to date and stay notified about exclusive offers and fashion tips.
More Stories
Isis Models light up the ramp at AMFW 2012