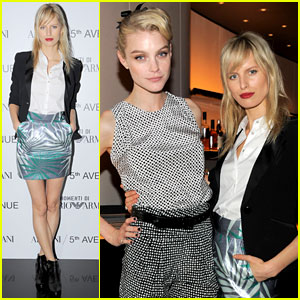 Jessica Stam and Karolina Kurkova rub shoulders at the opening of the Momenti di Emporio exhibit on Tuesday (April 5) in New York City.
The exhibition displays Emporio Armani images throughout the years that were originally featured in the Emporio Armani magazine.
Also pictured inside: Joe Zee, whose new show All on the Line premiered on the Sundance Channel last week! The show follows the Elle magazine creative director as he helps a designer in crisis each week.
FYI: Jessica and Karolina are wearing head to toe Emporio Armani.