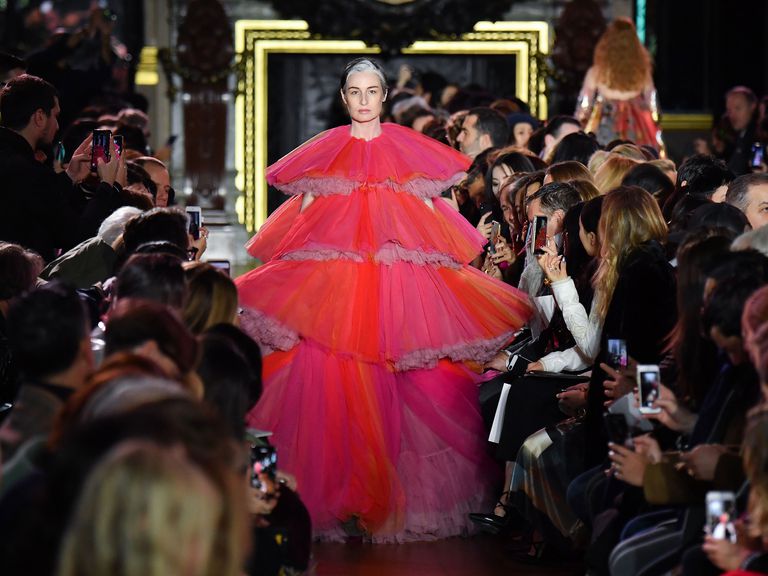 Erin O’Connor MBE is an English model, 40 years from Priscilla’s Model Management. Heavily pregnant with her second child with her partner Steve Gibson, she took to the catwalk during Couture Fashion Week in Paris this morning. The supermodel wore an enormous pink tulle gown by Schiaparelli as she walked in the house’s spring/summer 2019 couture show.

O’Connor took to Instagram to share pictures of the occasion and revealed that this was her “last hurrah” before she gives birth to her new baby.

The pink dress she wore was made up of four oversized tiers, making it almost impossible to tell that she was pregnant underneath. It was also impossible to see which shoes she was wearing, meaning that she could keep it very comfortable in Converse boots, as she later revealed on her Instagram account.

O’Connor kept the news of her pregnancy secret until November, where she revealed her baby bump at a party, which is exactly what she did as well during her pregnancy in 2014, when she showed off her bump on the red carpet quite late into her pregnancy.

Speaking of the news at the time, she said: “Nobody knew. This is my first outing. It was a well kept secret. Thank God for all those winter coats. I just thought I’d come out with a bang.”

O’Connor is not the first model to take to a major catwalk heavily pregnant. In fact, Slick Woods appeared in Rihanna’s Savage x Fenty lingerie show last year while in the early stages of labour, and went on to give birth to her son just 14 hours later.

Subscribe to stay up to date and stay notified about exclusive offers and fashion tips.
More Stories
MUSIC MEETS RUNWAY ENDS WITH A BANG AND ISIS MODEL AND NIGERIA’S NEXT SUPER MODEL FINALIST NKEMJIKA WINS THE MODEL COMPETITION.