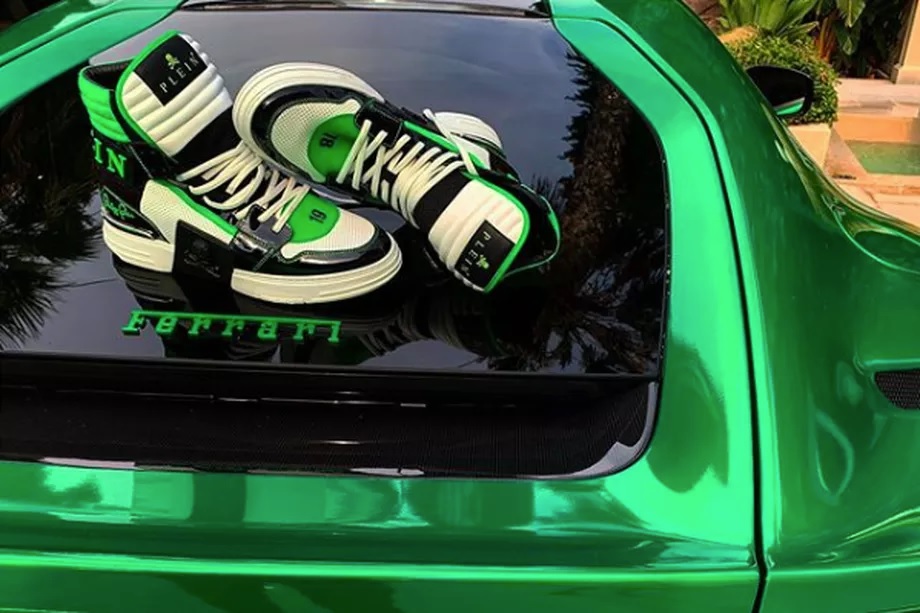 Ferrari is a brand known for luxury, and so they’ve got several fans worldwide who likes the luxurious taste. However, the automobile brand disliked the recent act of a German fashion designer, Philipp Plein with its Italian luxury cars. In a series of Instagram posts this week, Plein claims that Ferrari is threatening to sue him because he posted images of his sneakers on the hood of his own personal supercar. Ferrari says Plein’s behavior “tarnishes the reputation of Ferrari’s brands and causes Ferrari further material damage.”

Ferrari sent an official letter to Plein to claim that he is using Ferrari’s trademarks for the “promotional purposes” of increasing his own brand and products’ visibility. Just so we’ll know, the cars used in this picture belong to Plein’s. Ferrari is essentially claiming that Plein is harnessing its iconic imagery to bolster his own brand and also denigrate Ferrari’s.

GOT A LOVE LETTER ? TODAY FROM THE LAWYERS OF FERRARI ? asking me to delete the picture OF MY PERSONAL CAR WITH MY PERSONAL SHOES ? ON IT !!!!! I can’t even put in words how disappointed and disgusted I am about this unfair and totally inappropriate claim against me personally……obviously I love cars and ESPECIALLY FERRARI !!!! I bought my first FERRARI 10 years ago and recently I bought a Ferrari for my mother as her birthday gift !!!! I think it is absolutely ridiculous as a good client to receive such a letter from a company like FERRARI !!! This message goes out to the CEO Louis Carey Camilleri of FERRARI !! If you want to continue treating your loyal clients with such letters from your lawyers you will lose the support from many FERRARI FANS ! ? @scuderiaferrari

At the time of this publication, the pictures in question are yet to be deleted as requested by the car brand in their official letter sent to the designer. The letter indicated that the designer would be given 48 hours to respond appropriately, and obviously he didn’t.

Checking up on Plein, he is calling the letter “blackmail,” and has furthermore asked his followers to send photos of his shoes on top of their luxury cars. He even made a slideshow of what some of his 1.8 million followers sent. Plein’s stand against the luxury car brand isn’t just about his shoe brand and the Italian carmaker, but as he wrote, “This is a fight for our right to post on our private social media accounts whatever we decide (as long as it does not cause any harm to anybody).

SUPPORT THE FAMILY !! It’s honestly amazing how many people show love ❤️ and support the family ? …… I am receiving thousands of photos from PP ? on SUPERCARS from all over the world ? ITALY ?? GERMANY ?? FRANCE ?? USA ?? BRAZIL ?? UK ?? MONACO ?? AUSTRIA ?? NETHERLANDS ??……….. !!! Where do we all end up if brands will start to dictate us what to post on our personal Instagram accounts ?? Social media gives all of us the freedom of speech ✊ this is not a fight against Ferrari, this is a fight for our right to post on our private social media accounts whatever we decide (as long as it does not cause any harm to anybody) ! NOBODY SHOULD DICTATE US WHAT TO DO AND WHAT NOT ! ???DON’T PUSH US ✋ BECAUSE WE WILL PUSH BACK STRONGER ? MY MOVEMENT IS STRONG AND NOBODY CAN STOP US !

Checking up on Ferrari’s possible lawsuit, The Fashion Law reports that Ferrari could potentially build a sound argument. “Just as in the US, the holder of a registered trademark in Italy has the right to prevent third parties from using identical or similar trademarks for identical or similar products or services,” TFL writes. “Given the positioning of Plein’s footwear in the photo – i.e., right next to the Ferrari logos, and with the coordinating colors in mind, consumers might be led to believe that the two brands are working in collaboration for Plein’s footwear collection or are otherwise affiliated in some way, which would give rise to merited claims of trademark infringement.”

The Making of Nenekester Photobook by ISIS Models

However in a comment to Bloomberg, Carmine Rotondaro, an independent legal adviser to Plein, called Ferrari’s accusations “totally baseless.” It’s unclear whether Ferrari is following through with its plans to file the lawsuit, but we’ve reached out to the company for comment and will update if we hear back.