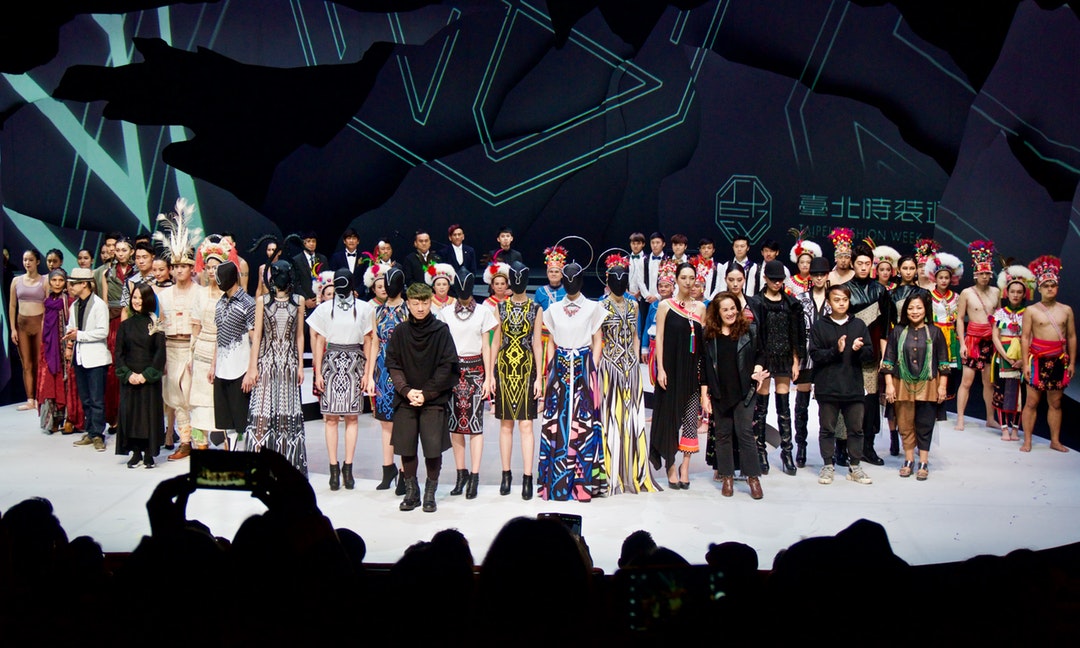 Taiwan fashion was the debutante at its own ball last week. The coming-out party featured more than 40 of the country’s brightest and best designer talents, backed by the Ministry of Culture.

The inaugural Taipei Fashion Week at the prepossessing Taiwan Traditional Theater Center (臺灣戲曲中心) was a triumph of form over function. Since the goal was to be seen and heard, rather than sell clothes, this could be counted as a win.

Fashion lovers, dressed almost uniformly in black, congregated in droves for the shows, which ran for four days from Dec. 6-9. Their images filled the evening news cycles and there was decent coverage in the local press. Inevitably, there was a lot of big talk about a brand-new era for Taiwan design.

Yet the shows, full of vim and invention, lacked a certain substance. The focus on being “culturally kinetic” and Taiwan-centric was kind of dated, a bit like constructivism in the desire to package local art and design for social and commercial purposes. Laudable enough, but more lipstick on the same pig if you’ve seen it all before.

This is not the first time that Taiwan has tried to push itself forward as a fashion hub … far from it. Previous attempts have foundered on a sea of government indifference and a shortage of talent emerging from design schools.

According to industry insiders at Taipei Fashion Week, these shortcomings have been corrected, and the local clothing design industry is now mature enough to reach out and make an impression, even if it is a “David versus Goliath battle” to take on the major players in the global industry.

It’s an entirely different situation from 15 years ago, when rich old ladies were the mainstay of Taipei’s fashion world, since they were the only ones who could afford couture, which was the only game in town.

Today, say the optimists, the playing field has leveled and streetwear is king. Meanwhile, boutique labels from talented young designers are “fighting to be heard,” plugged into an emerging and increasingly lucrative Asian fashion aesthetic.

In addition, those in the know contend the nation’s president is emphasizing innovative industries and there are fresh investment opportunities, which can make the most of existing advantages in technology, design and textile production.

Significantly, international publisher Conde Nast, design media guru DFun and the model management company Eelin Entertainment combined to provide much-needed expertise and gloss. In this they were backed by the coffers of both city and central governments.

Most importantly, there seems to be a determination to make Taipei Fashion Week an annual fixture on the events calendar, a bit like the Golden Horse Awards (金馬獎), which have become an important regional event for the movie industry.

In October, Taipei Fashion Week Part 1 descended on Xinyi district near Taipei City Hall. Amid the deafening din of traffic being held up, local and international brands presented runway shows for their Autumn/Winter season collections – followed by a pop performance from Jam Hsiao (蕭敬騰).

The idea was not only to create a splash, but also a springboard for the Spring and Summer (SS19) collections featured at Taipei Fashion Week Part 2 last week, in Shilin.

The opening show was the hottest seat in town and set pulses racing with a performance from opera great Liao Chiung-chih (廖瓊枝). It was a tech-forward, culture heavy production from director Li Xiao-ping (李小平), which set the tone for the runway shows that followed.

The main theater set had a Möbius strip, figure-eight inspired design featuring an idealized landscape of Taiwan; while the experimental theater set had an in-the-round element that created a crossover space, blending sound, light, static and dynamic presentation. It was all very cutting edge, without being avant-garde enough to put off any of the many dignitaries in attendance.

It was heartening to see that Taiwan’s fashion divas mostly set aside their petty rivalries to participate and put the country on the world’s fashion map. Longstanding brands such as CHARINYEH and Isabelle Wen (溫慶珠) stood up and were counted, along with the “Queen of Knits” Gioia Pan (潘怡良), who has won multiple awards and participated in major fashion weeks around the world.

It was disappointing not to see Shiatzy Chen represented, since the company practically defines the neo-Chinese chic movement and is a major fashion group, after being founded by the Changhua-born Wang Chen Tsai-Hsia (王陳彩霞) in 1978.

Whisper it quietly, but everything would have been perfect if Jason Wu (吳季剛) had turned up, as it was rumored he might. The Hugo Boss art director, famed for making Michelle Obama’s dresses pop, apparently had “scheduling commitments” – but don’t be surprised if he makes it next year.

Highlights of the week included the “Non-Traditional Materials Fashion Show,” which looked at new kinds of fabrics, many of which are produced in Taiwan. The “Indigenous Fashion Show” was bright and loud, as expected, but also showed that a new and more sophisticated aesthetic is developing. Should be worth watching.

The “Traditional Arts Fashion Show” covered high couture and was obviously inspired by Taiwan opera and puppetry; while the “Hakka Fashion Show” looked to the future as well as traditional cultural elements.

The experienced director Robbie Yan (嚴孝銘) of Eelin Entertainment commented after the shows that he was happy not only with his own productions but also Fashion Week as a whole, calling it a colorful fusion of Taiwan’s many cultural strands, and “a real mix of old and new.”

Taipei Fashion Week got a glitzy launch and next year’s edition should be worth watching to see where it goes from here.