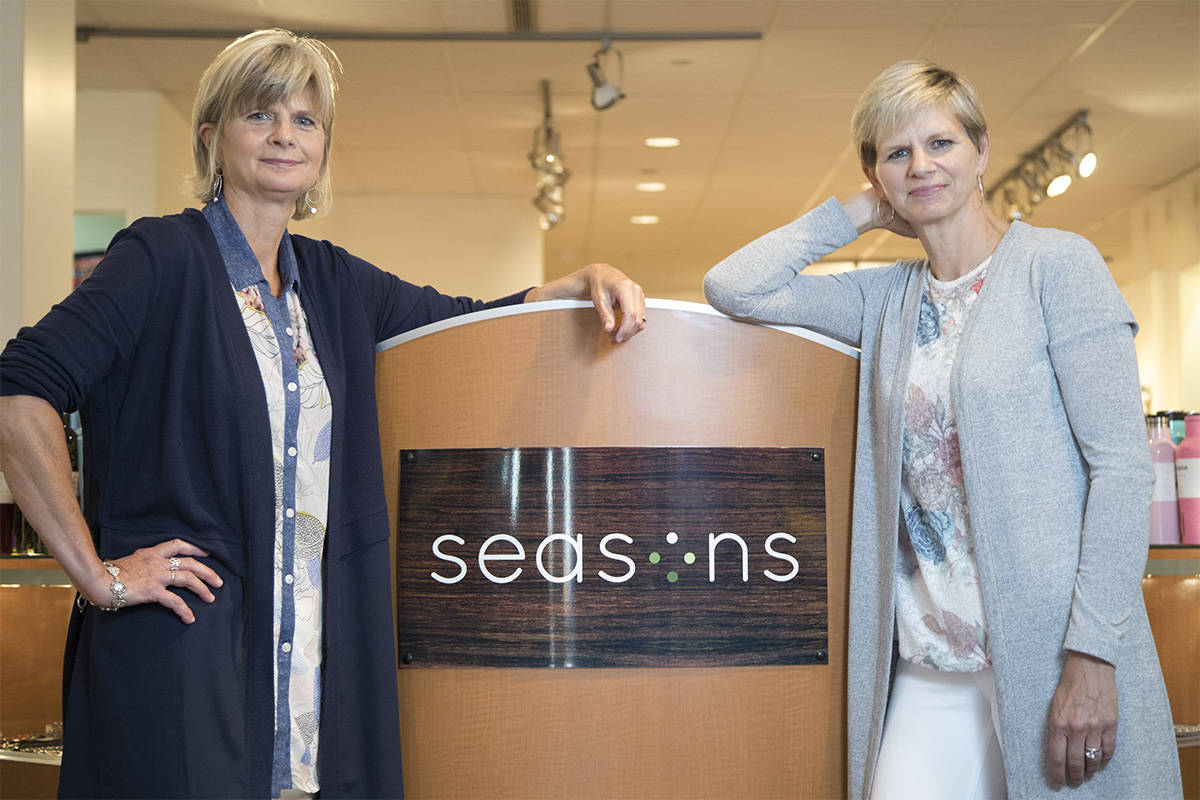 Whitehorse’s Seasons clothing store is a trusted one-stop shop where women can pick up a pair of jeans, a cocktail dress, lingerie and shoes in one go. But 34 years after first opening the doors, the sisters behind Seasons say it’s time for something new.

The store will be closing for good in November, with a goodbye party scheduled for Sept. 6.

“The timing just seemed to be right,” Maureen Nielsen said in a joint interview with her sister, Greta Gray, at the store on Sept. 4.

“ … It’s about right, about to retire, we’re going out on a high note, it’s been a great business, a very successful business, and you know, it’s nice to go out on a good note.”

Nielsen and Gray launched the business in 1985, when they were both in their early 20s. At the time, there was a ladies’ clothing store on top of what was then Hougen’s Department Store, Nielsen explained, and their father, who owned Hougen’s, asked them if they wanted to be partners with Hougen’s Ltd. on it.

While they had grown up around the retail business, both sisters had had other career plans at that time — Gray was studying education with the goal of becoming a teacher, while Nielsen had been accepted into a pre-veterinary program.

“… We really did feel that this was going to be kind of a short-term kind of a thing.”

It was a different kind of retail market in Whitehorse and the Yukon then, the sisters recalled.

“Back when we started Seasons, that was in the times when trying to fly out to Vancouver was a $1,200 ticket, right?” Nielsen said.

“It was really expensive to fly, so people generally would go out once or twice a year … It really was quite a captive market for retail because people didn’t do a lot of travelling and there was certainly no online sales. So we tried to bring in sort of the latest fashion so that people wouldn’t have to go Outside.”

The sisters said that Bev Muff, who had managed the ladies’ section at Hougen’s Department Store, took them under her wing, going on buying trips with the sisters to show them how it was done (Muff remains an employee at Seasons to this day).

Among their first tasks was scrambling to find suppliers for acid-wash jeans, which had just exploded in popularity. Also in fashion were big shoulder pads (“big suckers … the bigger the better,” according to Nielsen) and high-waisted jeans.

“And now, you know, it all comes around … the high-waisted (look) is coming back,” Gray said, noting that denim, of all trends, has never decreased in popularity.

As time went on, Gray took over the buying trips and working out on the floor while Nielsen took on a more behind-the-scenes role in the office.

Fashion also evolved — the sisters recalled the neons of the ‘90s, parachute pants, and, in what they say is the biggest shift they’ve seen over the decades, office wear going from strictly suit-jackets and skirts to more casual, comfortable wear.

(Gray said she’s a fan of the fashion of today, which focuses on comfort and feel, while Nielsen said she loved peplums.)

As well, the store hired a manager, Sheila Grant Dionne, who was with Seasons for 28 years and allowed the sisters to take a step back to focus on family.

In that time, the store grew from a 1,200-square-foot location on the second floor of Hougen’s to the street-level, nearly 5,000-square-foot space it occupies on the corner of Main and Third today.

The sisters stepped back into a more active role at Seasons about two years ago, with lots of familiar faces to greet their return.

“It’s so cool for us when customers that shopped with us 35 years ago still come into the store,” Nielsen said.

“I said, ‘Oh, have you ever bought Bootzie Oil before?’ And you know what? She says, ‘Ever since I was a little girl, my mum would bring me into Seasons, when you were upstairs on the second floor, and I would come and I would dab a little bit of Bootzie Oil on.’ And she said, ‘That was always what I did, every time I came in … I just always have to dab a little bit every time I come in.”

The people, Gray said, have always been her favourite part of the business, and she’ll miss regulars dropping by just to chat or say hello.

One of the “hardest parts,” Nielsen said, is also the knowledge that by closing Seasons, they’ll be leaving a gap in the market, although the sisters said that they’re sure someone will be able to step up to help fill the void in Whitehorse’s market.

As for Seasons’ physical location, Coast Mountain Sports and Sports Experts, owned by the sisters’ brother and his wife, are set to expand into the space. Nielsen said her brother had been suggesting for years that, should the sisters ever want to retire, he would love the retail space, and the timing worked out perfectly.

“It’s definitely not a sad shut-down story,” Nielsen said. “It’s in a good spot … Call it a shift.”

“I think we just want to thank, really, all the communities and Whitehorse for supporting us all these years,” she added. “It’s been fabulous.”