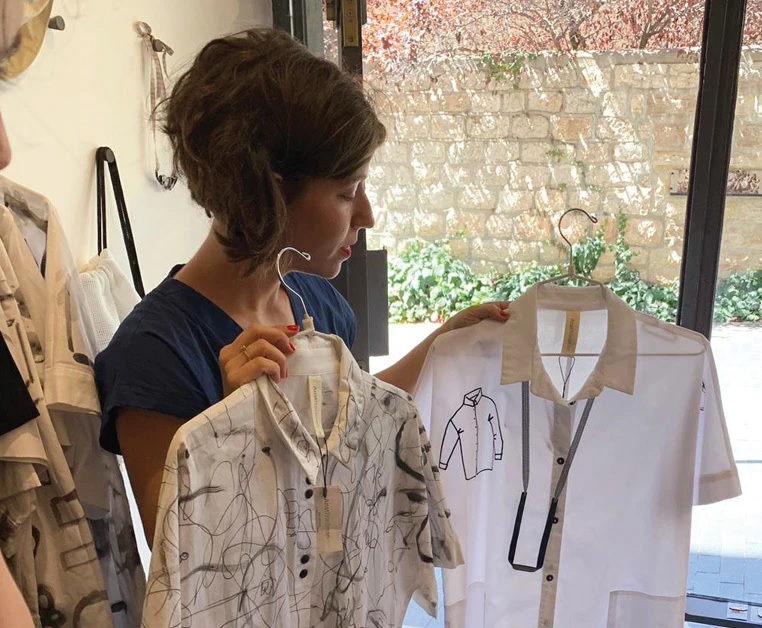 Walking through the bustling crowds and shouting shopkeepers of the Mahaneh Yehuda shuk, one would never imagine that in the heart of it all lies a serene, spacious artists’ studio, where the only sound comes from a handheld soldering device.

In the basement of an abandoned schoolhouse, Baara Guggenheim combines precious metals with concrete to create minimalist geometric jewelry. Beside her, Adi Yair uses her loom to weave gowns and coats. But the designers in Beit Alliance (as the building is known), and indeed the entire fashion scene in Jerusalem, tend to go unnoticed by the public. Liraz Cohen Mordechai (Liri) is seeking to change this. Read More Related Articles

Liri, an FIT-trained fashion blogger and lecturer, founded “Fashionating by Liri” four years ago, in an effort to empower Israeli designers and to give tourists a peek into the world of Israeli fashion. Liri has been traveling throughout North America to present Israeli designs, “telling the story of Israel through a unique perspective of fashion,” as Ilan Dotan, director of Israel programs at Fashionating, explained.

When Liri’s audiences asked if they could meet the designers themselves, Liri realized that it was time to start bringing groups to Israel. Fashionating’s tours have taken people to Tel Aviv, which Dotan admitted is the center of Israel’s fashion industry. But the fashion conversation rarely veers to Jerusalem.
“It’s a huge question: why don’t people talk about the fashion scene here in Jerusalem?” Dotan asked.

Fashionating opened its first fashion tour of Jerusalem in July, taking groups to Jerusalem’s nooks of innovation and creativity that have cropped up over the years.

THE MODERN fashion industry in Jerusalem dates back to the 1800s. Hemda Ben-Yehuda – wife of famous lexicographer Eliezer Ben-Yehuda – wrote a fashion column for the Jerusalem-based newspaper Hashkafa. Ben-Yehuda coined the Hebrew word for fashion: “ofana,” which is still in use.

Design found a permanent home in Jerusalem in 1906, when Boris Schatz established the Bezalel Academy of Arts and Design “to train the people of Jerusalem in crafts, develop original Jewish art and support Jewish artists, and to find visual expression for the much yearned-for national and spiritual independence.”

More than a century later, the Academy attracts more than 2,000 undergraduate artists to Jerusalem each year. The difficult part is keeping them there. After completing their years of study, many of the Bezalel designers choose to move to Tel Aviv to launch their artistic careers.

Bezalel Academy has launched a valiant effort to carve more room for young Jerusalem designers by providing them with subsidized studio spaces right in the heart of downtown Jerusalem. The top floor of Cafe Nocturno, on 7 Bezalel Street, houses a number of design studios in which artists have the chance to create and present their works.

“They have a place to actually sell their art and designs, which is amazing, because not many places offer this opportunity to young designers,” Dotan said.

Nocturno CEO Amit Magal-Schechter created the space to empower young designers and innovators. Magal-Schechter started the cafe 25 years ago and moved it to its current location nine years ago. At that time, the top floor of the space contained government-sponsored design studios, which Magal-Schecter decided to incorporate into his cafe framework.

“All floors combine into one, because everything that we’re doing here is something that is creative. Food is creative. Culture, art, fashion, music,” he said. Magal-Schechter named the cafe after Chopin’s Nocturnes, one of which is tattooed on his arm. “It’s basically my life project,” he said.

The cafe employs artists as managers and curators, providing jobs to around 55 creative souls. Yarden Moshe, a weaver and designer, uses the space to create and exhibit clothing from her Jahta fashion brand.

While traveling to India in 2016, Moshe fell in love with the traditional handwoven fabrics that she came across and began to design clothing using linen, raw silk and cotton.

Moshe designs her clothing in Israel and produces it by hand – down to the last stitch – in India. She draws inspiration from Israel’s desert landscapes and Bedouin population. Her palette includes black and white, to represent the dichotomy that she has both observed and bridged in Jerusalem.

“I know that there are two worlds inside of me, like this city and the nature, and I always try to find myself between them,” Moshe explained. “That’s one of the things I love about Jerusalem: it’s a city but it’s not really a city. It’s more like a big village, and really close to nature.”

DOWN THE block from Nocturno, still on Bezalel Street, a number of boutique shops have popped up in recent years – so much so that a sign reading “Designers Complex” directs pedestrians towards it. Jerusalem native Anat Friedman found her niche on this street after graduating from the Bezalel Academy of Fashion and Design.

Friedman said she uses Jerusalem fashion as a platform to combine her passions for painting and drawing.

“I found that fashion is a great combination because in the working process I can draw, I can sketch and I can really express myself,” Friedman said.

Fashion for her is tangible because she can touch the fabric, craft the look, sketch and make it with her hands, instead of just designing in front of a computer.

Upon graduation from the Bezalel Academy, Friedman originally sought a job in Tel Aviv. Initially, she believed there was no chance to work in fashion in Jerusalem. That is, until she received an offer from Nocturno. When she discovered that Nocturno hosted subsidized artists and designers in subsidized studios, her eyes widened with enthusiasm.

“I was there for three years, and it was my time to study the job,” Friedman said. “I learned what it takes to be a fashion designer. I learned how to work with a pattern maker, how to communicate with a seamstress and how to work with factories.”

Friedman believes that fashion design is so multifaceted, because she not only learned how to make her product, but also how to sell it. She claims that her three years at Nocturno helped her to realize that being a fashion designer was her dream. Years later, she opened her own shop that presents both modern and traditional clothes and accessories. Friedman’s clothing symbolizes the unification of Jerusalem’s past and present. Designing in Jerusalem is special to her because it is off the beaten track.

“You cannot take fashion in Jerusalem for granted,” Friedman said. “It was our vision to open this store because it’s not very mainstream.”

Friedman’s vision is to lure people in with Jerusalem’s unique fashion industry and style. Her clothes are simple yet communicative with styles that mimic canvases and drawing techniques. Some of her blouses and pants have more graphic designs and drawings inspired by what she lays out in the studio and draws on her walls.

“I think what inspires me the most is the body,” Friedman said. “I’m trying to keep it very minimalistic for the silhouette and for the appeal of the figure. I think my drawings serve as inspiration for shapes on the clothes.”

ANOTHER LOCAL fashion artist who believes in creating through minimalism is Baara Guggenheim, a jewelry maker who works with mixed metals and concrete to demonstrate the various layers of Jerusalem.

“If you look at the city of Jerusalem, there are so many layers,” Guggenhiem said. “The market by day is for shopping and at night it comes to life for so many people.”

Gugenheim aims to create jewelry that is simple yet beautiful. Her most popular products are rings and necklaces with a grey concrete set in mixed metals with circular shapes. It is modest, humble and accessible – much inspired by her experiences living in Jerusalem.

According to Dotan, the different atmospheres in each city are what make the designs from each one so distinct.

Previous
Genderless Fashion, is it cool? Here are Brands that embrace it… 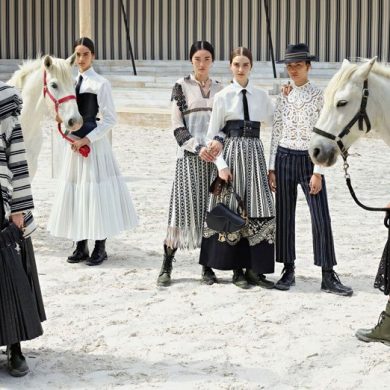