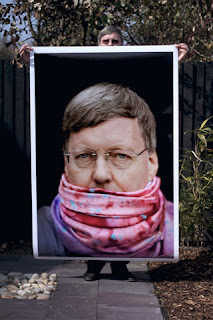 PROFESSOR Richard Weston is perhaps fashion’s most unexpected new design star, having been recently snapped up by iconic British store Liberty – through its new reality television series, The Next Big Thing. Weston, who is also professor of architecture at Cardiff University, impressed buyers with his range of unique scarves – which are based on scans of minerals, fossils and stones, which he finds near his home in Cardiff. His students are still struggling with his new-found fashion status.

Aside from his academic pursuits, Weston is also widely known in literary circles for writing Alvar Aalto – a book dedicated to the Finnish architect and designer, which won 1995’s Sir Banister Fletcher Prize as the architecture book of the year. Weston says his love of pattern has been long-standing.
“I’m known in architecture as a writer but I’ve always been intensely visual and in love with colour,” he tells us. “My first year tutor was an extraordinary Iranian who saw ‘architecture’ as embracing visual order in nature, buildings, everything. I’ve got lots of books about natural forms and patterns, Islamic tiling, rugs, fabrics, etc., and the ‘decorative’, mostly French, painters whose work I particularly love – for example Matisse, Bonnard and Vuillard.”
The professor admits venturing into fashion has been a far cry from his day job, but he’s enjoying the experience.
“So far it has been an almost unalloyed pleasure – getting in had its frustrations, but the fast-moving world of fashion and sensual delights of high-end retail are a welcome contrast to Britain’s under-funded and over-audited universities,” he says.
With his scarves collection proving a hit, Weston’s label looks set for expansion.

“I sponsored a project called ‘Frocks from Rocks’ with Newport University’s fashion students, with promising results, and Liza Bruce has used some for swimwear (I met her husband by chance in a mineral shop),” he says. “I have no delusions about becoming a new Karl Lagerfeld however! I’m looking to work with designers who share my passion for the prints.”