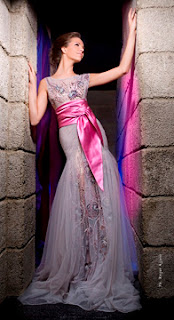 Renowned Lebanese designer Edward Arsouni will present his latest luxurious collection at Couture Fashion Week New York. Marking the designer’s first appearance at the prestigious event, the fashion show will be held at 8:00 p.m. on Sunday February 20, 2011 in the iconic Grand Ballroom of the Waldorf-Astoria on Park Avenue, New York City.
Edward Arsouni began his fashion design career in the early ’90s. After graduating from Istituto Aristico Marangoni in Milan, Italy, he had the honor to work in the famous Gianfranco Ferre Maison de Couture and the Anna Ascione Maison de Couture in Via Spiga, Milan. After returning to his native Lebanon, the designer established his own couture house in 1994. Today his label is synonymous with luxurious personal style and the highest quality design, and caters to an exclusive and discerning loyal clientele.