Six years ago Dr. Dre was walking along the beach with Interscope Records chief Jimmy Iovine, pondering whether or not he should launch his own shoe line. “[Forget] sneakers,” said Iovine. “Let’s sell speakers!” 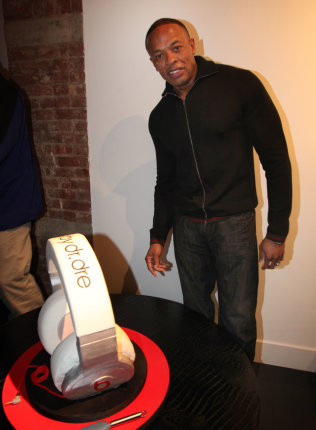 It might have been the best piece of advice the rapper-producer ever received. In 2008 he teamed with Iovine and a handful of other partners to launch Beats By Dr. Dre, which now sells more than half of the country’s premium headphones ($100 and up). That’s music to the ears of Dr. Dre, who collected $100 million pretax when handset maker HTC paid $300 million for a 51% stake in the company last year.

With $110 million in pretax earnings, Dr. Dre is this year’s Hip-Hop Cash King—despite the fact that his long-awaited album, Detox, remains on the shelf. He’s not the only one on the list who banks the bulk of his bucks outside the recording studio. Diddy ranks No. 2 with $45 million, thanks mostly to a share of profits from Diageo’s Ciroc vodka; Jay-Z ranks third with $38 million, pulling in more than half his annual earnings from ventures including ownership stakes in cosmetics company Carol’s Daughter, the Brookyln Nets and a joint venture with battery maker Duracell. Last year, Jay-Z topped the list with $37 million.

“The reality of it is, you want to do something that you own,” says frequent Jay-Z collaborator Timbaland, who ranks No. 20 on the list with $6 million. “You want to own what you put your heart into. That’s how you make money.”
Kanye West ranks fourth on the list with $35 million, fueled by his Watch the Throne album with Jay-Z and the ensuing tour, followed by Lil Wayne at $27 million. The diminutive rhymester’s latest album, Tha Carter IV, sold a million copies in its first week; he also launched clothing line Trukfit and a partnership with Pepsi’s Mountain Dew, the first major product endorsement in the veteran rapper’s career.
Lil Wayne is joined on the Cash Kings list by labelmates Drake (No. 6) and Nicki Minaj (No. 8), who banked $20.5 million and $15.5 million, respectively, thanks to new albums, tours and product endorsements with companies like Kodak and Pepsi. Their boss, Cash Money co-founder Bryan “Birdman” Williams, ranks seventh with $20 million. Even lower down on the list, artists are getting paid considerable sums to shill products.
“We’ve received a lot of income based around endorsements,” says former Def Jam President Kevin Liles, who now manages a host of artists including No. 18 Young Jeezy. “A lot of brands are saying, ‘Hey, there’s a value proposition, instead of this freewheeling spending … I have some guaranteed curators and travel agents that can help me reach the consumer in a better way.'”
Yet for a few artists, music alone is a viable path to earning millions. No. 9 Eminem sold more albums last decade than any artist in the world, and continues to cash in from his extensive back catalog and occasional tour dates, pulling in $15 million.
Ludacris rounds out the top ten with earnings of $12 million. The multihyphenate mogul’s non-musical ventures include Conjure cognac, headphone line Soul, voiceovers for RadioShack and roles in movies such as Fast Five and New Year’s Eve.
“We work so hard that we never get a real chance to stop and reflect on what we’ve done sometimes,” says Ludacris. “So the FORBES list is a great representation of, ‘You know what, wow, we are out here working as hard as hell!'”

To compile the Cash Kings list, which charts pretax earnings for all living artists whose work is primarily classified as hip-hop or rap, we looked at income from touring, record sales, publishing, films, merchandise sales, endorsements and other ventures. Management, agent and attorney fees are not deducted; earnings are tabulated from May 2011 to May 2012 and based on data from Pollstar, the Recording Industry Association of America and Nielsen SoundScan, and from interviews with numerous managers, lawyers, record executives and some of the artists themselves.
All in all, hip-hop’s top 20 earners pulled in $415 million last year, the most since 2008’s $515 million. The more recent total got a heavy boost from Dr. Dre’s impressive haul, but it doesn’t mean he’s resting on his financial laurels. Earlier this summer, he and his partners bought back half of the 51% stake in Beats that they sold to HTC nearly a year ago—meaning that fans waiting for his new album might have to hold out a little longer.
“I understand why Dre didn’t finish Detox,” says Liles, with a laugh. “It’s called Beats.”