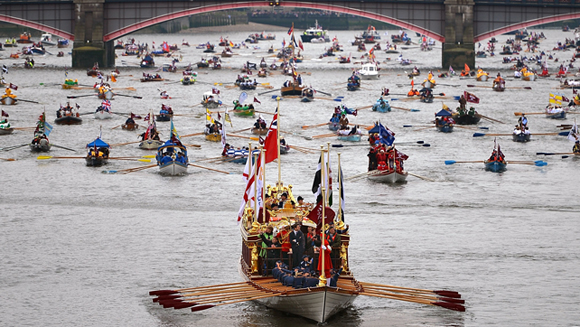 The incredible fleet of boats which travelled down the River Thames in London to mark the Queen’s Diamond Jubilee on Sunday has secured a Guinness World Records title for World’s Largest Parade of Boats.

The procession started up river at Battersea Bridge, eventually making its down to the east of the capital at Tower Bridge.

The fleet encompassed the biggest collection of historic vessels ever assembled on the Thames including the Amazon, a boat which took part in Queen Victoria’s Diamond Jubilee in 1897 as well as The Royal Barge carrying The Queen, The Duke of Edinburgh and other members of the Royal Family.

In order to crack the Guinness World Records title previously held by Günter Wichert and the Sport Skippers of Bremerhaven, Germany, the fleet had to meet stringent regulations covering a minimum distance of two miles.

While more than 1,000 boats were on the Thames on Sunday, under Guinness World Records, stationary boats such as police vessels did not count towards the final total.
The river procession marked the capital’s 16th record breaking challenge as part of World Record London – a calendar of unique and one-off record-breaking events taking place around the capital from now until July 2012 celebrating the UK capital’s most exciting attractions, venues, events and activities with the aim of crowning London as a multi record-breaking city.
Culled from Guinness World Records

Subscribe to stay up to date and stay notified about exclusive offers and fashion tips.
More Stories
THE HARDLEY APARTMENTS: NOW OFFICIAL SPONSOR OF NNSM 2011