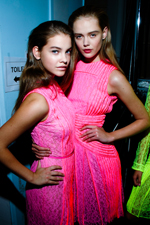 The British Fashion Council (BFC) has announced that Christopher Kane is the winner of this year’s BFC / Vogue Designer Fashion Fund.  The Award, which is now in its second year, comprises of £200,000 and access to director level mentors across the industry, was established to further enhance the reputation of London’s rising stars and assist in the development of their businesses.

The BFC will develop a bespoke mentoring programme tailored specifically to assist Christopher Kane in achieving his business goals for the next twelve months with the aspiration that the network developed during this year will endure throughout his career as he makes the transition from a developing creative business into a global fashion brand.

Christopher Kane was selected for this award based on a his business plan and presentation at interview to the judging panel.  The presentation demonstrated both Christopher and Tammy Kane’s determination to meet an ambitious plan, through appointments and brand development opportunities.   Eight designers were shortlisted by a panel of representatives of Fund sponsors.  All of those shortlisted were then invited to present their collections and future plans to the judging panel of Fund sponsor representatives and industry experts chaired by Alexandra Shulman, Editor of British Vogue.  All of those shortlisted will have access to support from the mentoring panel either directly or through Marigay McKee, Harrods Director of Fashion and Beauty who will chair the mentoring panel.

The Christopher Kane label was set up in 2006 and is jointly owned by Christopher and his sister and collaborator Tammy. Christopher trained at Central Saint Martins and won ‘New Designer of the Year’ at the British Fashion Awards in 2007. He also designs for Versus and his own name label is stocked in stores around the world including Barneys, Jeffreys, Browns, Liberty, Dover Street Market, Harvey Nichols, Net-a-Porter, Joyce, Maria Luisa, Printemps, and Corso Como.

The British Fashion Council has an international reputation for supporting emerging talent through its existing schemes; NEWGEN supported by TOPSHOP, NEWGEN MEN sponsored by Topman and Fashion Forward sponsored by Coutts & Co. The BFC Vogue Designer Fashion Fund will aid business growth and create employment opportunities, it is complementary to existing support schemes and will focus on developing profile and opportunities for British designer businesses.

The Fund was launched by BFC Chairman Harold Tillman in September 2008. Vogue, headline sponsor, whose March issue is on sale early February will showcase the talents of all eight finalists.