Carmen Dell’Orefice was born before Fashion Week even existed. The 81-year-old, who walked the runway for both Marimekko and Norisol Ferrari at NYFW on Monday, is the oldest working supermodel in the industry and proud of it. 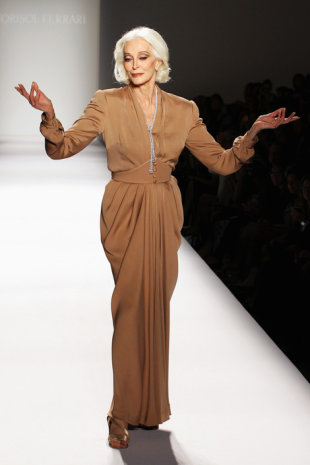 “It’s what I enjoy doing, and I’m able to do it,” she told the Today Show before stepping on to the runway in a mocha-colored floor-length gown.
Discovered at 13, while riding a New York City bus with her mom, she landed the cover of Vogue only three years later. That was back in 1947, when $7.50 an hour was the going rate for the gig.

PHOTOS: The Worst Fashion Trends of All Time
“It meant nothing to me,” she recalls of seeing her first cover, “except that I thought I looked like a little boy.”
The octogenarian beauty has long shed any hint of tomboyish-ness. Her iconic white hair, which she’s left dye-free for decades, has set the highest bar for aging gracefully.
She’s had a little help, according to Today show correspondent and interviewer Jenna Bush Hager (yes that, Jenna). Dell’Orefice admits to using fillers for “cracks in the ceiling,” but it takes a lot more than an injection to be one of the most in-demand models after 66 years in the business. Her shoulders thrust back in triumph, projecting a couture-worthy regality uncommon on the runway these days.

PHOTOS: New York Fashion Week’s Stunning Makeup Looks
It’s the kind of peacocking pride only a veteran of the business can pull off. It’s also a throwback to the days before slump-shouldered models, minimalism and Kate Moss made high fashion more bone-dry.

Vogue, Today ShowThat may be why Dell’Orefice still works so much. When a designer or advertiser wants to convey true luxury, they call Dell’Orefice. In recent years, she’s been the face of Rolex and Issac Mizrahi’s Target line, between runway shows for Heart Truth, Adrienne Vittadini and Qasimi, among others. 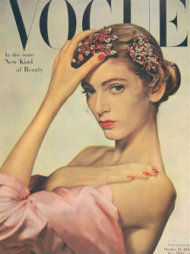 “I think America may be growing up and accepting the fact that the bulk of life exists beyond 50. Because demographically … the vast population is over 50,” says Dell’Orefice.

PHOTOS: Fashion Week’s Most Ubiquitous Fashionistas
She’s onto something: Older women with cash to spare have become a coveted demographic for marketers of luxury products. As a result, fashion has started is taking cues from women once considered past their prime.

Even outside fashion’s tiny bubble, women, not girls, have taken the reigns of style. The most powerful cross-generational trendsetter in America today is a 48-year-old mother of two. That would be Michelle Obama, as if you couldn’t guess. 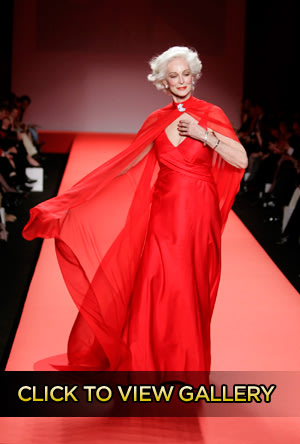 Still in the world of modeling, youth is remains the beauty standard. While models as young as teenagers still share the stage with the likes of Dell’Orefice, there isn’t much competition. She’s already been the teen model and done the ‘it’ girl thing. She’s also posed for Salvador Dali, married and divorced multiple times, had a child, quit modeling, raked in millions, and lost it all to Ponzi con-man Bernie Madoff, her ex-boyfriend’s best friend. Dell’Orefice has personally intersected with some of modern history’s most famous and infamous cultural touchstones, and she isn’t slowing down at 81.

At a Fashion Week event on Friday she was photographed linking arms with 28-year-old Olympian Ryan Lochte, looking every bit the model of the moment.

Subscribe to stay up to date and stay notified about exclusive offers and fashion tips.
More Stories
Kate Middleton and Meghan Markle Have Been Going On Secret Engagements