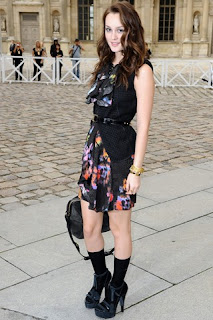 After New York, London and Milan, Paris Fashion Week provided almost as many fashion moments off the catwalk as on for style spectators.

Rihanna and Katy Perry were doing the rounds, making front row appearances at the Karl Lagerfeld, Balmain, Gareth Pugh, Chanel and Louis Vuitton shows. Claudia Schiffer both took in the hay-strewn Chanel show and later was joined by Kate Moss at the Yves Saint Laurent catwalk.

Elsewhere, Miranda Kerr was spotted relaxing at a café before her surprise appearance on the Balenciaga catwalk, while two of our favourite stores – Colette and Browns – hosted parties for their favourite fashion people.

The prize for the week’s starriest front row goes to Marc Jacobs at Louis Vuitton, who had Leighton Meester, Camilla Belle, Freida Pinto, Virginie Ledoyen, Zoe Saldana, Katy Perry and Daisy Lowe all in attendance to see his bouncy afro-ed girls take to the runway.