Are the original supermodels to reunite for Duran Duran? 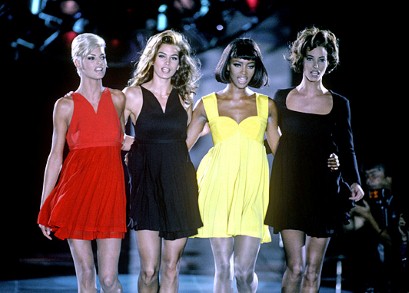 Kate Moss and Naomi Campbell back on the catwalk for Louis Vuitton
Rumour has it that Yasmin, wife of Duran Duran’s Simon Le Bon, herded the girls together to shoot a video for the band’s new single, Girl Panic , a coup that recalls George Michael’s now iconic Freedom video.
Domenico Dolce and Stefano Gabbana of Dolce & Gabbana were involved in the shoot; Fashionista posted pictures from Stefano Gabbana’s Tumblr page of the supers in black corset dresses and leotards. Lucy Yeomans, the editor of Harper’s Bazaar , was also there to capture the “girls on film” for a cover shoot.
According to Yeomans’s Twitter account, the shoot went on until 3am and was such a success that Christensen sent her flowers the next morning. She tweeted to Simon Le Bon: “Just seen stills and they’re amazing. More champagne waiter…!”, before adding: “This has to have been one of the most extraordinary days of my life. A little bit of fashion history made!”

Subscribe to stay up to date and stay notified about exclusive offers and fashion tips.
More Stories
Nigeria’s Next Super Model Screening and Fashion Show at Scintilla, Lagos.