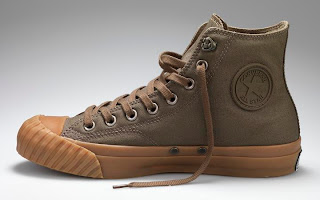 One will be amazed to know that Converse Rubber Company, one of the world’s best leading brand in the footwear business formed in 1908. With more than hundred years of expertise, it has come out with so many varieties of shoes and footwear for fishing, camping and sports shoe specially made for basketball game. Even this company manufactured military shoes and footwear during the Second World War for the U.S. government. Converse has so many credits to it in the manufacture of footwear because of its quality.Converse Rubber Company partnered up with Ace hotel and Alex Calderwood who is the creative head of Ace Hotel. With this partnership they are going to produce rubber-wrapped and canvas shoes in new design that will have a look similar to that of the shoes dating back to 1940s. They made some improvements in the already existing design of Chuck Taylor classic and renamed it as Chuck Taylor All Star Bosey. They made use of design used in U.S. military shoes during 1940 with the modern design and manufactured it.The Ace hotel has made the right decision by partnering with Converse. This is welcoming step from the Ace Hotel as they are trying to make their footprints in designing and products apart from their hotel and restaurant business.
They have put on for sale about 300 units of Chuck Taylor All Star Bosey. These are priced at 100 dollars and are available at the branches of Ace Hotel in New York, Seattle and Portland. It can also be purchased online by clicking here.