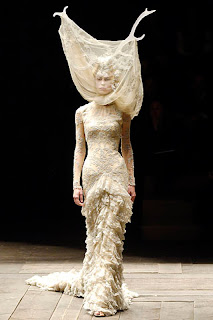 SARAH BURTON has reiterated Alexander McQueen’s attention to detail, unique vision and sense of originality, as she recalls some of his most well known collections. Burton is currently one of fashion’s most talked about figures, having been tipped to design Kate Middleton’s wedding dress, as well as being the latest name in the frame for the Dior job.
“The [autumn/winter 2006-07] collection was about the 1745 massacre of the Scottish Jacobites by the English, which Lee felt so passionately about because of his Scottish family heritage, which his mother had researched,” she explains. “The women were the widows of the slaughtered army. This dress was actually based on my wedding dress – I got married two years earlier. We had to figure out how to make lace work in the round with those ruffles because Lee hated gathering. So we cut out all of the flowers from the lace and reappliquéd it on tulle to make our own fabric. This is the collection most people remember as the one with Kate Moss in a hologram. Oh, my God, it was so beautiful. He loved that show.”
In honour of the Met’s new tribute exhibition to McQueen – Savage Beauty – the designer, spoke of how her former boss impressively wove his seasonal themes into every aspect of his collection.

“So much of the [spring/summer 2001-02] show was about the collective madness of the world. It was presented in a two-way mirrored glass box in London, and the girls had bandaged heads, acting like inmates of a mental asylum,” Burton tells US Vogue. “Lee wanted the top of this dress to be made from surgical slides used for hospital specimens, which we found in a medical-supply shop on Wigmore Street. Then we hand-painted them red, drilled holes in each one, and sewed them on so they looked like paillettes. We hand-painted white ostrich feathers and dip-dyed each one to layer in the skirt.”