Editors, actors, and models alike took a night off from gala season last night, exchanging ball gowns for cocktail dresses, to celebrate the opening of Hugo Boss’ new Hugo store on Greene Street and honor the Young Collectors Council of the Guggenheim Museum. That famous edifice was reproduced in miniature, crafted entirely out of Legos—and while there were plenty of clothes on the racks, it was the mini museum that caught Chloë Sevigny’s eye. “I don’t think [they’re] for sale but I really want one of those Legos,” she said, wearing a sleek, black and white Hugo Boss number. “I actually slept over in the Guggenheim once for an art exhibit—that was pretty cool,” she added.

Though he wasn’t ready to spend the night there, Ryan Kwanten (a regular wearer of the Boss brand) seemed to feel right at home in the Hugo store. “I know it’s a weird comparison, but the lighting is quite similar to set lighting in here,” the Aussie actor observed, as he leaned against one of the Grecian-style white columns lining the center of the store. The soft red overhead lighting he was describing was a major focus in the design element, the scarlet hue being the mainstay color of the Hugo brand identity, according to Hugo Boss creative director Eyan Allen. Kwanten added, “It can’t detract too much, in this case, from the clothes.” The handsome True Blood star was the one drawing eyes away from the pieces hanging nearby. Looking sharp in his suit, he confessed, “In Australia, we don’t like to look like we try too hard when we dress, but I have learned to dress up my style. And I just recently discovered skinny jeans.” But, he clarified, “not so tight that anyone would question my manhood or anything.” 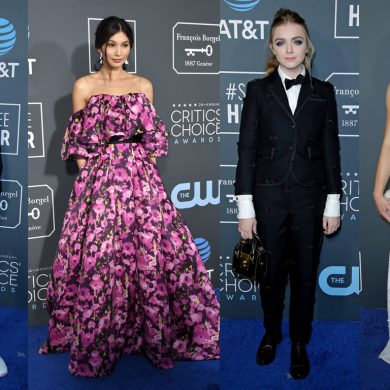